How THE BAGGY DUCK OF RAINBOW'S END was created

All stories come from an original idea.  The idea for Baggy Duck came in the form of a boat docking beside us named "Baggy Duck."  During this time, a friend of ours named Joy was having her boat hauled out of the water and it was going to a city called Rainbow.  I put this all together inside myself and the title Baggy Duck of Rainbow's End was created!

I was taking a beginning calligraphy class at the time at Point Loma Art and Design.  So using a list of the first 100 sight words, I created the story. It had a good beginning--Baggy left the ocean looking for a rainbow that he thought would make him happy.  The middle-- where he picked up all sorts of colored objects to put in his bags. He didn't know what they were but they were warm. End--he met a leprechaun who shows him where true happiness lives. So all the elements were there including the problem and solution.

Here is the watercolor my son did and the original calligraphy! 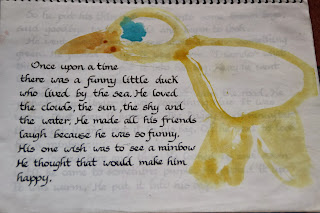