I am looking back today at my posts, I realize I am wanting to post something about today not yesterday. I myself as many of you have been writing for many years. Many of you as I have begun to self publish our books for our own satisfaction. I already know where I have come from and how much self effort it has taken to get here NOW. So this is the place that I will continue as the beginning. 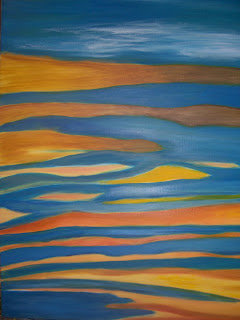 I am so enjoying having all my writing and calligraphy around me. I  learned to draw and paint in the last year. It has given me so much solace and healing inside myself. My focus is changing to include art and music. I am realizing that I am not bound by my past of being a writer. I can take it anywhere into the future to a place that feeds my soul. This is what I call the creative process.


Posted by Divya Maureen Quinlan at 2:59 PM No comments:

In 1978,  I began writing again. I had moved onto a 30 foot sailboat called Arke with my boyfriend in 1975. We lived in the moorings between Lido Island and Balboa Peninsula. We rowed out to the boat and left our dinghy Sunstone at the dock. We lived with the birds--seagulls, cormorants and terns. I felt that I lived in paradise. It was true. We had no phone, address, or electricity. We charged our batteries with an alternator charge control system. Pretty soon we discovered other people who lived there and  the Tin Can Club was formed.

I wrote about everything I saw. My first article was called "Bob Is Captain Dawn Is Crew." published in CASTOFF magazine.  I was writing under the pseudonym of Dawn Walker at this time. Soon after they also published "Could That Be Food" about the seaweed that we found there on the mooring buoys.By 1980, my article "The World Is My Home" was sold to CRUISING WORLD an international magazine!! "Catalina 30 The Family Cruiser" and  "Beyond Conception" were published the the in house Catalina magazine.  Then "A Sailor Is Born" was published in 1986 by CRUISING WORLD!

We had sold our mooring and were now cruising up and down the California coast. I began to write children's stories and a screenplay called "The World Is my Home." Every time, I would meet someone who would show me the next step in my writing path.  I wrote a children's novel in 1984 called HALLOWEEN BRIGADE. I was guided to write shorter children's books and in 1986 created the original BAGGY DUCK OF RAINBOW'S END for my son as his first reader. It was done in calligraphy!

My son was getting older and we came into San Diego Bay.  We found a dock after ten years of being offshore!  I began to take all of my published writings and journals and spent the next five years putting it into a book called A WRITER IS BORN.
Posted by Divya Maureen Quinlan at 10:17 AM No comments:

I began writing in high school when my English teacher Ms. Howie told me I could create stories and read them in front of the class instead of writing book reports! So I wrote "Investigation Earth," "Buried Alive!" and "The Star of Freedom." My grandmother, Genevieve Smith would type these stories for me on her old typewriter which she willed to me when she passed on. My favorite was "Investigation Earth," as it was about an alien who came to earth and was supposed to destroy the earth. Instead, he fell in love with a woman, played football, went to the Vietnam War and saved the Earth.

I would sit in my room in an old two story house in Arcadia, California and write at  antique desk with a fold down top. I had a flowered chair upholstered in my favorite colors of blue and green on which I would sit to get ideas.  The ideas would just come. I could hear a voice actually telling me the stories. If I ever couldn't think of the ending or got stuck, I would go to bed and just know that it would be solved in the morning. The answer always came.
Posted by Divya Maureen Quinlan at 2:03 PM 2 comments: